Playing the Taiko physically demands a lot from a drummer. Similar to Martial Arts, it requires physical flexibility, strength and suppleness.
Since 1984 Circle Percussion has been training on its special and original Japanese instruments under the guidance of the Taiko masters of KODO. Our instruments were built by the well-known and most valued Japanese drum builder "Asano Taiko Company".

Check out the visually spectacular Japanese taikos all around.

A summary of the highlights over the years, from the founding in 1973 when it was still called 'Circle Ensemble' up to the present day. More than 45 years of percussion history.

Check out our highlights

Circle Percussion has been in existence since 1973. Back then a modern music ensemble, now a percussion group playing all over the world.

Musicians and their stories

NAGADO DAIKO
This is a barrel-shaped drum and is basically made of one piece of wood. In the past, the beautiful wood species Zelkova or Keyaki was used, among others. For environmental reasons, nowadays more common glued wood is also used. These very expensive drums are strung with ox skins by means of metal rivets, which makes it difficult to adjust the tension. Such a medium-sized drum easily weighs 85 kg.

Miyake is one of the seven islands of Izu, south of Tokyo. Here, drums often accompany the folk song "Kiyari Uta", which literally means "song for moving a huge tree". The song was therefore used to coordinate the work of workers in dragging large trees.

In this piece, the drum is positioned low, which requires an unusual and strenuous posture for the player. This technique, in which the player rotates from the hips and plays the drum suspended above the ground, makes this piece at least as exciting to see as it is to hear.

Every year on 3 December, in Saitama province, in the area called Chichibu, a night festival is held in which richly decorated carts are pulled into the middle of the village. The Yatai Bayashi can be heard from the small room under the cart, invisible from the outside.

To give an idea of the atmosphere in which crowds of people pull huge carts, Tagayashu Den chose three larger Nagado Daikos played in a lower tuning than is usual in Chichibu. This is the version Circle Percussion learned from KODO: very powerful and loud but still in the original rhythm.

The rhythm of Yatai Bayashi is very complex, while great attention must be paid to the sound and the way of playing, emphasising, as in KODO, the spectacular visual aspect.

This makes Yatai Bayashi the most popular but also the most feared piece in the Circle Percussion repertoire. 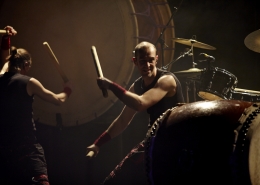 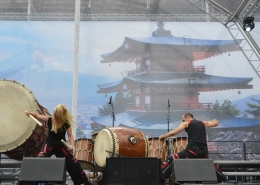 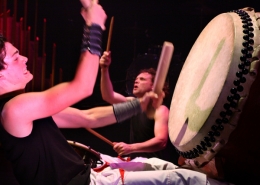 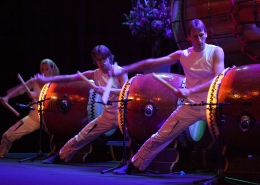 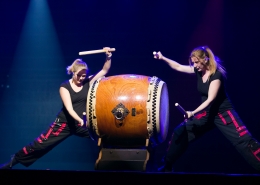 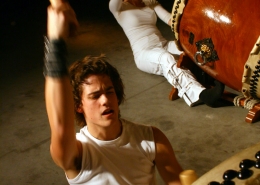 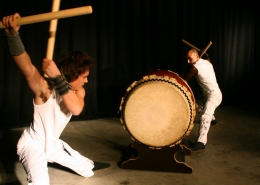 The Okedo O daiko (Okedo = made of staves, O = large, Daiko = drum) by Circle Percussion is the largest taiko outside Japan and was built especially for the ensemble as an experiment. This giant has a diameter of 1.95 m and a length of 2.55 m (275 kg). This makes it, as far as we know, the largest ODaiko outside Japan that can be played. The rhythm of the O daiko is simple. On one side, a player beats a basic accompanying rhythm, to which the player on the other side is free to improvise. When sound and rhythm become one, both players and listeners are involuntarily drawn to the O daiko.

Playing this colossus demands a lot from the player, both mentally and physically. Few are able to handle and control this enormous drum of almost two metres in diameter. There are therefore few taiko players, even at KODO, who can and do play this giant. The drum can be played on both sides or on one side. Depending on the choice, the audience sees the taiko drummers from the side or from the back.

This is a cylindrical Japanese drum that, like its big brother the Okedo O daiko, is made of staves. The drum heads are stretched with ropes. Depending on the diameter of the drum, which can vary from 30 to 100 cm, the drum produces a powerful high to deep dry sound and, compared to other Japanese drums, sounds warmer and more melodious and is less 'penetrating'.

The Katsugi Okedo style (slender Okedo) has become extremely popular in the last 10 years. The style was adopted from the Korean Samulnori instrument called "Changgo". It is festival music, danceable and with a nice virtuoso swing. The Okedo, hanging around the shoulder, is played only by the left stick on both sides. The right stays on one side of the sheet. Very impressive! 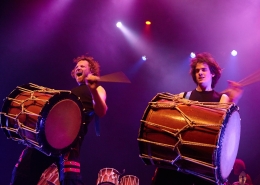 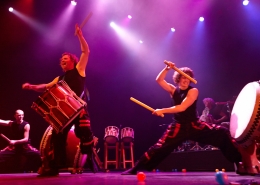 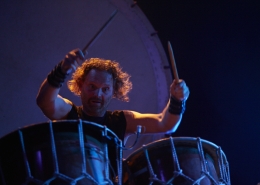 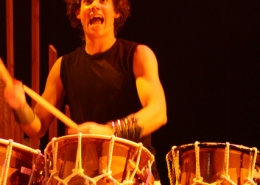 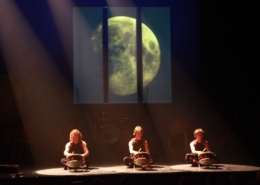 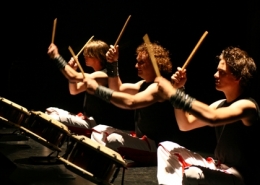 Shime Daiko' is a general name for shallow Japanese drums. These can be both the more delicate drums used in Kabuki and Nòh theatre and the sturdy and heavy drums played by KODO and Circle Percussion. This drum produces a high, bright sound. The skin of the drum is relaxed after playing, because otherwise the permanent stringing will stretch the skin too much and eventually tear it.

With help from, among others, the Prince Bernard Fund, new instruments are purchased.

Circle Percussion, founded in 1973 by Michael de Roo under the name 'Circle Ensemble', has been led by business and artistic director Erwin Oudshoorn since 2002. The ensemble was named after the first piece it performed, 'Circles' by Italian composer Luciano Berio. With this performance, the ensemble won a major prize at the international Gaudeamus Competition in 1974. Thus the ensemble determined its guidelines for the future: high-quality performances of contemporary music with a central role for percussion.

An important development for the ensemble came from its introduction to the visually and musically spectacular Japanese percussion. This resulted in the first concert ever performed on Japanese instruments by non-Japanese percussionists (Holland Festival 1983).

Another highlight for the ensemble was a more than five-week tour of Japan at the invitation of the "Tokyo Summer Festival" (1987).

1988 was the year of the major fire in the annex of the Utrecht Conservatory at the Mariaplaats in Utrecht. On 12 March of that year, this historic building and the Circle Ensemble's instruments were almost completely destroyed by fire. Thanks to a benefit concert, in which Jasper van 't Hof and Slagerij van Kampen participated, and generous donations by the Prins Bernhard Cultuurfonds, the collection of special percussion instruments could be rebuilt. To this day, Circle Percussion still speaks of 'before' and 'after' the fire...

The Okedo O Daiko, our biggest Taiko, was the only Japanese drum to emerge from the blazing fire thanks to the alert response of roadies and firemen.

In the same year, the company was invited by Nederlands Dans Theater to take part in the performance of the now world-famous ballet 'Kaguyahime' by choreographer Jiri Kylian.

Besides the cooperation with Nederlands Dans Theater, the ensemble has played a major role in various other important productions. Concerts were given in Japan, Israel, Argentina, America, during the World Expo in Seville (Spain) and in Bremen (Germany) as part of the celebration of the first 'Tag der Deutsche Einheid' (Day of the German Unity) (in memory of the fall of the Berlin Wall).

Circle Percussion was also active during the anniversary year of the 100th Olympic Games in Atlanta in 1996, both with the Nederlands Danstheater as part of the performance of Kaguyahime during the Olympic Arts festival, and with the theatre show 'Drums of the World'.

Circle Percussion produced the theatre show 'Drums of the World' in 1996, in collaboration with Anumadutchi. This successful theatre show, which was performed in various versions around the world some 250 times, was a trendsetter in the field of percussion performances. This was the starting point for a successful career in theatre.

With the performance of 'Drums of the World' and the cooperation with the local Taiko trio 'Honoo Daiko' during the Extasia 97′ in Japan, the ensemble was among the absolute highlights of the evening.

Over the years Circle Percussion has played on many major world stages. In India during the opening act of the CLT20 Champions League Cricket in front of 275 million television viewers. In Qatar with artist Norman Perryman with the beautiful production 'Kinetic Painting' and at many festivals and events in for example New York, Buenos Aires, Los Angeles, Dubai, London, Seville, Tel Aviv, Madrid, Valencia and GrahamsTown (South Africa).

Circle Percussion has been under the leadership of business and artistic director Erwin Oudshoorn since 2002. 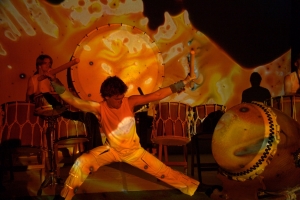 The history of taiko

For centuries, the Japanese drum, the taiko, has been an indispensable instrument in Japanese life and culture. However, interest in this instrument declined sharply around the middle of the Meiji era (1868 - 1912). Fortunately, traditional percussion has been enjoying great popularity again in Japan for decades, where groups such as Kodo, and previously Ondekoza, are now flourishing.

The Japanese drum was used in ancient times for hunting, communicating, luring or scaring away wild animals and for encouraging soldiers in battle. The drum was also played by ordinary citizens to add lustre to festivities. Even today, drums still have various functions in Japan.

Around 1965, Tagayasu Den developed a new way of playing the traditional Japanese instruments. At first, he was not interested in the music. He founded a commune with mainly young people, where great physical and mental discipline prevailed.
For years, the Circle Percussion players have patiently mastered the unique Japanese playing styles developed by the famous Kodo group. These playing styles differ fundamentally from the western styles and are experienced as very spectacular by both the players and the audience.

At first, Circle Percussion limited itself to the traditional pieces such as: 'Yatai-bayashi', 'Miyake' and 'Odaiko solo'. They turned out to require a different kind of dedication than western musicians were used to. It has always been the balance between power and beauty that made Japanese drumming so difficult and intriguing at the same time.

As the group of players succeeded in mastering the discipline that Japanese percussion demanded, individual freedom became greater both physically and musically.

In addition to their own special musical background, our musicians have all received internal training at Circle Percussion. Circle Percussion trains its players in the tradition of the Japanese taiko group KODO.

No images available at the moment